On November 15th, His Majesty King Mohammed VI of Morocco inaugurated, in the presence of French President Emmanuel Macron, Al Boraq, the rail link between Tanger and Casablanca, first high-speed line in Morocco. A major project in which the Colas Group took part for the 185 km section between Tanger and Kenitra.

Colas Rail and its subsidiary Colas Rail Morocco won in alliance with Egis Rail, the contract of design-construction of the High Speed Line between Tanger and Kenitra for the 185 km of double tracks. The construction works concerned railways (studies and works), catenaries and two works bases (studies, supply and works). Among the 850 employees mobilized by Colas Rail on this project, 95% were locally recruited.

GTR, a Moroccan road subsidiary of Colas, also participated in the construction of the rail lines by carrying out earthworks, which represented 5 million m³ of cuttings and 2.5 million m³ of embankments.

To this major Colas Rail reference in Morocco adds up lines 1 and 2 of the Rabat-Sale tramway and line 1 of the Casablanca tramway. 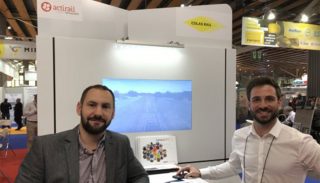